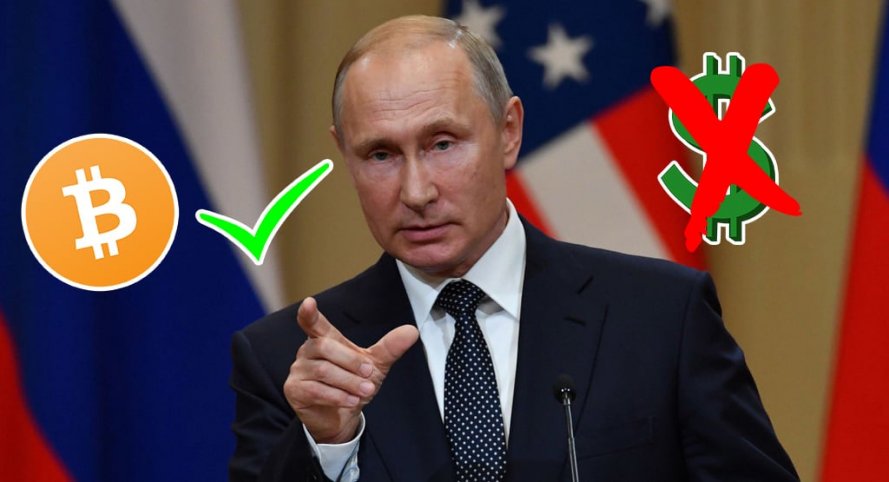 Russia is preparing an investment in Bitcoin to replace the US dollar as a reserve currency in a bid to tackle US sanctions, according to a Russian economist with close ties to the Kremlin.

Vladislav Ginko, an economist at the Russian Presidential Academy of National Economy and Public Administration, a state-funded institution, said the government is taking steps to minimise the impact of US sanctions that have hit the Russian rouble by replacing some of its US dollar reserves with the world’s most popular cryptocurrency.

US sanctions on Russia over the past year have come after the poisoning of former Russian military officer Sergei Skripal. Mr Ginko believes Russia’s de-dollarisation decision is fundamentally a move to “protect its national interests” due to a possible interruption of “US nominated payments flows for Russian oil and gas” and claims investment could be as much as $10billion.

Cryptocurrencies have seen a surge of interest in Russia, with President Vladimir Putin expressing interest in the digital assets in recent months. Mr Ginko believes Bitcoin and the wider cryptocurrency industry now account for 8pc of Russia’s GDP, and investment to bolster the country’s reserves with Bitcoin could start as soon as February.

“[The] Russian government is about to make a step to start diversifying financial reserves into Bitcoin since Russia [is] forced by US sanctions to dump US Treasury bonds and [take] back US dollars,” Mr Ginko said.

“These sanctions and the will to adopt modern financial technologies lead Russia to the way of investing its reserves into Bitcoin.”

The Central Bank of Russia is yet to publish official plans, but said in a statement to The Daily Telegraph that it "publishes information on the foreign assets management with a six-month lag". The country has shown signs of de-dollarisation by boosting its holdings of the euro, Chinese renminbi and Japanese yen.

Mati Greenspan, senior market analyst at trading platform eToro, understands that there is “definitely an interest from the [Russian] government to do this”.

Bitcoin saw a drastic sell-off in 2018 that saw its market capitalisation slip from around $230.9bn in January to $66.6bn by the end of December.

The alleged Russian plans to invest in the digital asset would see the state purchase almost a sixth of the world’s Bitcoin, though Mr Greenspan believes the buy order could push the price and valuation up, reducing Russia's share following a potential investment.

The Russian government would be unable to open an account with an exchange to buy cryptocurrencies, so investment plans could involve the setup of an “intermediary cryptocurrency” that can then be exchanged for Bitcoin.

The new cryptocurrency would have to be offered by a broker such as Sberbank, a state-owned bank, and would act as what’s known as a utility token.

“The proposal that I understand is on the desk of the finance minister at the moment is to create some sort of intermediary cryptocurrency,” Mr Greenspan said.

In 2017 Mr Putin met with Vitalik Buterin, the 24-year-old Russian founder of cryptocurrency Ethereum to discuss possibilities in the sector, and has met personally with the Ethereum head in recent months.

“We know that Vladimir Putin is a big advocate of blockchain technology,” said Mr Greenspan.

“Obviously he doesn’t like the sanctions that have been placed on him and he’s already said that these types of sanctions are going to lead to de-dollarisation. This is more or less the direction the Russian government is going.”